Hard to believe we have been at this for five years, come October. That is a lot of blood, sweat, and cuss words…let me tell you! We have learned a lot and we have grown. We are making a name for ourselves and doing what we love. Sometimes it doesn’t seem like we are making too much progress, but then we look back and think “Damn!”

I did that today. My entire day has been nothing but entering and calculating data to see exactly what it is we’ve accomplished, by the numbers. So! Here it goes…

Those last three fill us with the greatest sense of accomplishment.

Highlights of the last five years:

If you’ve made it all the way to the end here, thank you. It’s a lot of content but we are covering five years 😉 We’ll be making periodic posts throughout the year up to the anniversary. Thanks for joining us on this adventure!

Our next campaign is about to launch:

eSpec Books is working in conjunction with The Awakened editor and game designer Hal Greenberg to bring you the first-ever incursion of The Awakened phenomenon in the modern world.

The sudden appearance of a second moon in Earth’s sky awakens latent abilities in humanity…a link to a familiar, control of the elements, and so much more becomes possible as the second moon takes effect. What impact will this sudden change have on society? Only time will tell.

If you would like to check it out, the URL is http://tiny.cc/AwakenedModern 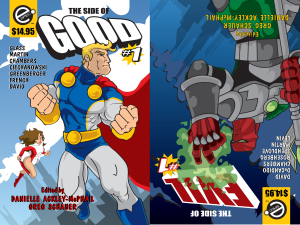 We are proud to announce the release of the highly anticipated flipbook anthology The Side of Good / The Side of Evil. Sure, heroes get remembered, but sometimes the tales and legends of even the darkest villains will never die.

Whether rooting for the courageous superhero or secretly siding with a malicious scoundrel, this epic journey captivates and excites as it delves deep into the perspectives of two classic yet diverging tales of both good and evil, extenuating on the best and worst that über-mankind is capable of.

Inspiration for this mythological American classic came easily to co-editor and award-winning author and editor Danielle Ackley-McPhail. “I am an idea person, I love to develop themed projects and find all the intricate ways to play to the theme. When someone suggested a collection of superhero fiction the idea for The Side of Good / The Side of Evil immediately came to mind and there was no question that it had to be a flipbook anthology, similar to the classic Ace Doubles from the ’80s. It took me three years to make it happen but the end result is even better than I’d envisioned.”

Indulge both impulses with this nostalgic flipbook anthology—The Side of Good / The Side of Evil. After all, everyone is the hero of their own story and sometimes a change in perspective can make a world of difference.

Superheroes inspire us to be more than we can be, and on the flip side, Supervillains are reminders of the potential for darkness within us all. The Side of Good / The Side of Evil looks at the best and worst that über-mankind is capable of.

The wait is over and it’s time to party! This Saturday November 21, 2015 join us for a pre-release launch for the highly anticipated nostalgic flipbook anthology, The Side of Good / The Side of Evil.

What: Philcon: The Side of Good / Side of Evil Launch Party
Where:  Crowne Plaza Hotel, Cherry Hill, NJ in the Con Suite (suite 823)
When: Saturday, 7pm-9pm.

Can’t make it to the launch? We’re sad to hear it, but you can still get this amazing collection. Pre-order your copy on Amazon.

NOTE: To get this book in ebook pre-order the individual ebooks The Side of Good (B016Z5GEF8) and The Side of Evil (B016X95RC2)

For those attending Philcon (www.philcon.org), here are our current panel schedules:

How to adapt old myths and create new ones. What makes a belief
system appropriate for a world.

So you have a finally finished a story. What are the main markets?Who do you want to avoid?

How accurately is it depicted in SF literature, and how has it been
extrapolated into future settings? Who is writing it believably

How do you handle building story arcs and developing characters when
you’re not solely in charge of a world? What changes when you’re
working with others at a professional level

eSpec Books is very pleased to announce that The Side of Good / The Side of Evil has come off the presses and is on it’s way to our hot little hands. We are excited about this project and hope you are as eager to see it as we are. The official release date is December 1, 2015.

If you just can’t wait, there are several things you can do.

First – you can join us at Philcon, a science fiction convention in Cherry Hill, New Jersey the weekend of November 20 – 22. We’ll be launching the book there and will have copies on hand for sale. Our party is scheduled for Saturday, November 21, in the Con Suite, from 7pm to 9pm. Not only will there be food, fun, and PRIZES, but editors Danielle Ackley-McPhail and Greg Schauer will be there, along with authors Gail Z. Martin, Keith R.A. DeCandido, James Chambers, Drew Bittner, Aaron Rosenberg and artists Jason Whitley and Mike McPhail, all of us ready to celebrate with you.

Second – Pre-order the print book on the eSpec Books Store: The Side of Good / The Side of Evil. All orders will be shipped out right after the launch.

Third – Pre-order the ebooks (there are two) on Amazon. They will deliver to your ereader as soon as the calendar flips over to December 1.

Indulge both impulses with this nostalgic flipbook anthology—The Side of Good / The Side of Evil. After all, everyone is the hero of their own story and sometimes a change in perspective can make a world of difference.

Superheroes inspire us to be more than we can be, and on the flip side, Supervillains are reminders of the potential for darkness within us all. The Side of Good / The Side of Evil looks at the best and worst that über-mankind is capable of.

eSpec Books interviews Walt Ciechanowski, contributor to The Side of Good / The Side of Evil, a Superhero Flipbook anthology, http://tiny.cc/SoGSoE.

eSB: Which side are you writing for?

WC: Heroes, although my “hero” doesn’t really feel like much of one.

eSB: Please tell us a little bit about the inspiration for your story.

WC: I wanted to strip away some of the typical superhero tropes. Prince Charming (the hero in my story) isn’t buff or handsome. He also has a superpower that isn’t very helpful in supervillain slugfests, so he doesn’t feel like he fits in. Having said that, he is most definitely a hero, even if he doesn’t believe it himself.

eSB: Who is your favorite superhero and why?

WC: The Flash (Barry Allen). I’m not sure why, but I picked him at an early age. I really enjoy time-travel stories, though, so that definitely plays a part in keeping the Flash close to my heart. I’m a huge fan of the new TV series.

eSB: In your opinion, what characterizes a hero?

WC: A hero must be vulnerable – anyone with enough superpowers to avoid being hurt can play at being a hero. A true hero takes risks, often against her own self-interests, to do what’s right.

eSB: In your opinion, what characterizes a villain?

WC: A good villain doesn’t see herself as a “villain;” she’s only doing what she feels needs to be done because she has the power to do so. We’ve all had those momentary impulses where we’ve gotten frustrated and mumbled to ourselves “if only I had superpower X…” Villains have superpower X and follow through.

eSB: What is your viewpoint on Sidekicks?

WC: I like sidekicks – they are sounding boards and help heroes stay grounded and focused on what they are doing and, more importantly, why they are doing it. A good sidekick is a reflection of her hero’s own past and an opportunity for the hero to learn from her early mistakes. She also challenges the hero to remain one.

eSB: What other comic or superhero-related work have you done in the past?

WC: I work in the roleplaying games industry and I’ve worked for several superhero RPG lines, including DC Adventures, Mutants & Masterminds, and Rotted Capes. If we want to lump in pulp heroes, then I’ve also done work on Thrilling Tales and MARS.

eSB: Please tell us about your non-comic related work.

WC: I mentioned above that I work with RPGs. Recently I’ve done work on the latest edition of Dungeons & Dragons and Doctor Who. I’ve also done work on Victoriana (steampunk fantasy), World War Cthulhu (does that one need explanation?), Dragon Age, and other lines. I’m also one of the Gnomes of Gnome Stew, an RPG blog, and I’ve co-written several similarly-themed books with other Gnomes for Engine Publishing.

eSB: Please let us know where you can be found on social media.

eSB: Thank you for allowing this glimpse beneath your alter-ego. We’re looking forward to more super heroics and evil geniuses to come. 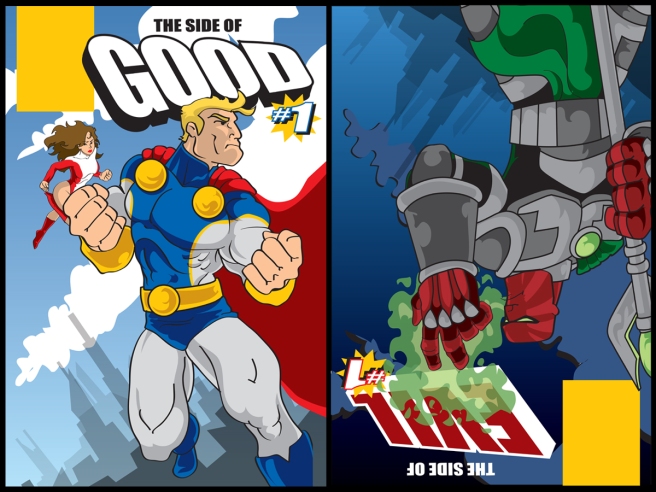 Everyone loves a hero…but sometimes we can’t help but root for the villain… Indulge both impulses with this nostalgic flipbook anthology —The Side of Good / The Side of Evil —launching on Kickstarter today. After all, everyone is the hero of their own story and sometimes a change in perspective can make a world of difference.

Here is a sneak peek at The Side of Good / The Side of Evil, edited by Danielle Ackley-McPhail and Greg Schauer.

https://www.kickstarter.com/projects/e-specbooks/1929755081?token=b84135df
The campaign goes live on July 7th. Let us know what you think! If you REALLY like it, there is a button that lets you set a reminder for when the project goes live.
We are looking for venues interested in featuring the project in a promo spot. If you have an opportunity we can pursue, please let me know.
Also, this volume is invitation only, but if we hit the right stretch goals there are two proposed companion volumes that will each have 6 open submission slots.