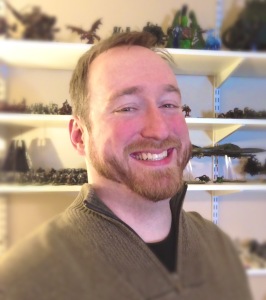 eSB: What is your favorite western movie and why?

BCPS: Tombstone. I adore Val Kilmer’s Doc Hollywood, and the chemistry he and Michael Biehn had was legendary. It has one of the best ensemble casts ever, and extremely memorable scriptwriting.

eSB: What does the wild frontier mean to you?

BCPS: An untamed land full of wonder and adventure, similar to a fantasy setting… but with guns, wide-brimmed hats, and tons of dusty trails.

eSB: Who would you say is your Wild West role model and why?

BCPS: Wild Bill Hickock; not only did he earn an amazing job earning his reputation, but he has one of the most epic deaths in Wild West semi-history.

eSB: What is your favorite spec fic/western mash-up?

BCPS: Cowboys vs. Aliens. It was kind of low brow and goofy, but very pretty and filled with interesting ideas.

eSB: What would you say is required reading for fans of Weird Wild West fiction?

BCPS: Our book! No seriously, although it takes place mostly on another planet, Burroughs’ A Princess of Mars has many of the same feelings and fun ideas.

eSB: Can you tell us anything about your story for The Weird Wild West?

BCPS: My story is a different take on the “lone wanderer” or “pale rider” sort of tale. Told from the point of view of a bad man waking to a confusing set of circumstances, the story follows him as he figures out his fate.

eSB: What interested you in working on this project?

BCPS: A fellow writer friend of mine pointed me in its direction, I read the project synopsis, and I was immediately intrigued. I love mixing aliens and demons and magic where they shouldn’t be!

eSB: How do you research to capture that western feel?

BCPS: In this instance I decided to watch a couple of different films to get me in the mood. Tombstone, 3:10 to Yuma, and Fallen. That last one will become more evident as to why when you read the story.

eSB: Have you had any weird western experiences of your own? Please tell us about it.

BCPS: Not especially, but I did think every prairie dog in a huge field near my father’s house were watching me once. I felt they had some kind of prairie dog hive mind.

BCPS: Grubs of some indeterminate origin, but of immense size, spit roasted over a campfire. “Hey Cookie, cut me off a piece of that slimer!” Yeah, that would work.

eSB: Which Wild West archetype (Gambler, Outlaw, Saloon Girl, School Marm, Railroad Man, Pioneer, Cowboy, Lawman or Indian) would you chose to be and why?

BCPS: Gambler, all the way. I love going to the casino even now, and the idea of getting to play my way across the frontier… oh yeah, that would be the life.

eSB: Have you written/created anything else in a weird western vein? Please tell us about it.

BCPS: Back in the days when I wrote for Privateer Press, I did a lot of fiction in their Iron Kingdoms line. While technically fantasy/steampunk, there were a few settings that could feel weird west a bit.

eSB: What are some of your own works readers can look for?

BCPS: Honestly, most of my previous work is in the gaming industry. Look at things like the Conan Roleplaying Game, early Iron Kingdoms stuff, and a lot of sci-fi licenses. Also, I have another short story published in the back of Lauren Beukes’ Zoo City, but that is really heavy sci-fi – no west at all.

eSB: What projects of your own do you have coming up?

BCPS: I’ve been focusing a lot on designing board and card games lately, but I keep plugging away on a novel for an existing sci-fi property that I’m not supposed to talk about until they announce it. Rest assured… I’m happy to be part of that team.

eSB: How can readers find out more about you? 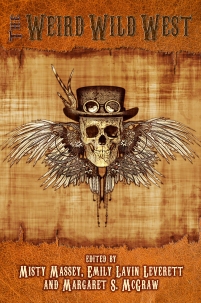 The untamed frontier is a challenge, a test of character, a proving ground for the soul. It’s a place where pioneers rewrite their future, or end their days…for better or worse. In the spirit of Bret Maverick, Cat Ballou, Kwai Chang Caine, and James West, The Weird Wild West blends western grit with the magical and mysterious unknown that waits beyond the next horizon.