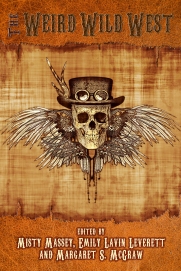 A pirate finds herself lost in a sea made of dust and still in possession of a treasure she’s determined to protect against every danger.  Is it worth the effort to return to the ocean she left behind, or has she been brought across the world to become something greater than she ever expected she might be?

The pirate made landfall at midnight in the dry stretch of the midwest, and staggered forward until dawn. The sun rose behind her to gild the land, and she followed her shadow forward, more or less, until it puddled at her feet. The air was crisp with heat, and the uneasy weight of the treasure she had stolen dragged at her heart.

Each step she took left a wet bootprint on the ground. When she stopped to gather her bearings, judging the sun or the wind or the lay of the land, a puddle would begin creeping sulkily out from under each sole.

Her name was Abishag Mary, and she walked into an idea of the West.

When her shadow was starting to bleed out behind her again, she crested yet another hill and stumbled down towards a cabin, although not the kind she was used to. Despite the distance she’d walked, she hadn’t found her land legs, but that was part of the curse; the sea was always and ever two steps behind her, waiting to fill the air with roaring wet breath. So Abishag Mary was a stranger to land, and when she saw a small square block with no deck or hull below, it took her a minute to find the word ‘cabin’.

She’d had a better cabin, once. The windows had been larger.

A woman came out, cast-iron pan in hand, frown on her sun-weathered face. She stopped when she saw the pirate, and the two women stood that way a long moment; Abishag Mary with her feet planted wide and her hands a little akimbo for balance, and the woman with the frying pan half-raised as if a shield, staring frankly over the round black circle of it.

“Where did you come from?” the woman said after a moment.

The woman’s eyes were storm-brewing grey. They measured out Abishag Mary, weighing her white-as-salt hair against her walnut-shell skin, all rumpled and weathered by years at sea and now dried into something that’d never be smooth again. They took in the salt-stained boots and the travel-grimy clothes and the wide hat. And the saber on one hip, balancing out the pistol on the other. It was a very odd pistol to see in the West, a great thing of black iron and redwood chased with bright brass inlays.

They weren’t sharp enough to see the treasure Mary carried, and that suited Mary fine.

“No ma’am.” Abishag Mary was no saint of any kind, but she was footsore and hungry and not minded to start a fight. And the woman’s eyes were less like clouds brewing a storm and more like the sea under those clouds, and it touched something in Mary’s heart to see them.

“Well,” the woman said, “suppose you can visit, then. I’m Grace O’Regan, and this is my home.”

The inside of the cabin was neat and dim, floored with split planks. Mary’s boots left footprints, but not wet ones. Only setting foot on land proper could bleed away the sea creeping up towards her heart.

“You often get people stopping by?”

Mary looked out one of the windows. The gold and brown land was as wide as any sea she’d seen, and on the horizon were low rising foothills, blue with distance.

“Well,” she said, “I could stand to do a little good, measure of my deeds. Afore we turn to what help is it you’re needing, where the hell am I?”

Mary blinked and stared out of the window again. She’d been many things, but landlocked hadn’t ever been one of them.

Still and all, perhaps it wasn’t the worst place to be, given how she’d left things with the sea. They were on bad terms.

The untamed frontier is a challenge, a test of character, a proving ground for the soul. It’s a place where pioneers rewrite their future, or end their days…for better or worse. In the spirit of Bret Maverick, Cat Ballou, Kwai Chang Caine, and James West, The Weird Wild West blends western grit with the magical and mysterious unknown that waits beyond the next horizon.